From 2011-2012, together with my team mate Marie Lim, I spent seven months on a feature writing project called the Green House Effect. It is a news package about the rising number of environmentally friendly buildings in Singapore. The original package, 10,300 words long, is based on interviews with close to 50 architects, engineers, scientists and government officials. About half the package has been selected for publishing on the Saturday Special Report of the Straits Times. Here is the opening story (mostly original before the edits): 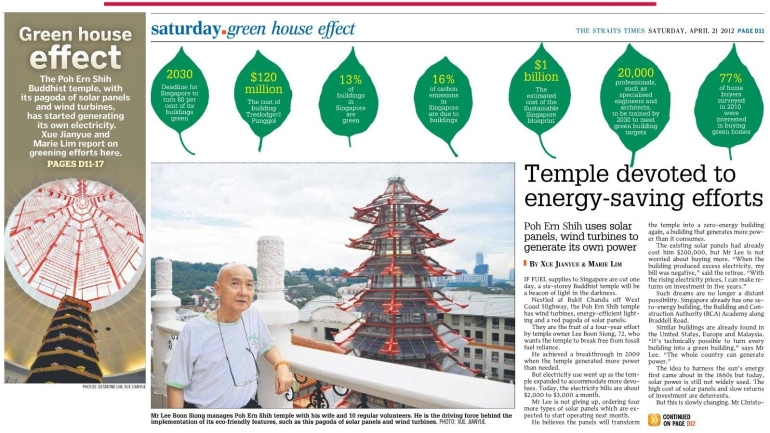 IF FUEL supplies to Singapore are cut one day, a six-storey Buddhist temple will be a beacon of light in the darkness.

Nestled at the foothills of Bukit Chandu off West Coast Highway, the Poh Ern Shih temple forges ahead in freeing Singapore from her reliance on imported energy.

Built with a red pagoda of solar panels and wind turbines, the memorial to fallen soldiers of World War II has started generating electricity beyond its own needs. 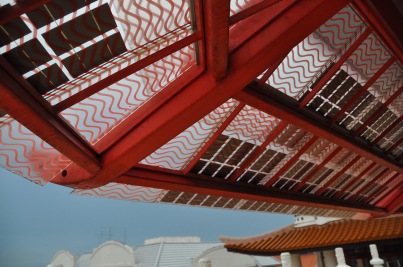 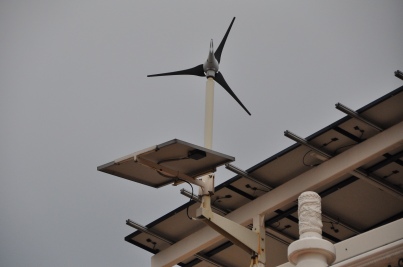 Its success raises the possibility of turning more buildings into batteries. This means getting power from wind and sunlight, ending Singapore’s near-complete reliance on foreign fuel imports to meet its energy needs.

Such buildings would also be immune to fuel supply disruptions across the globe.

Inspired by self-powering houses in Canada, where he resided for 16 years, Mr Lee spent the last four years installing solar panels, energy-efficient lighting and water collection tanks onto the temple.

The solar panels cost about $200,000, but he said it will only take five years to recover the cost as he will reap energy savings in the long-run.

“When the building produces excess electricity, my bill is negative,” said the retired lawyer. “It makes a lot of sense for Singaporeans to go down this route.” 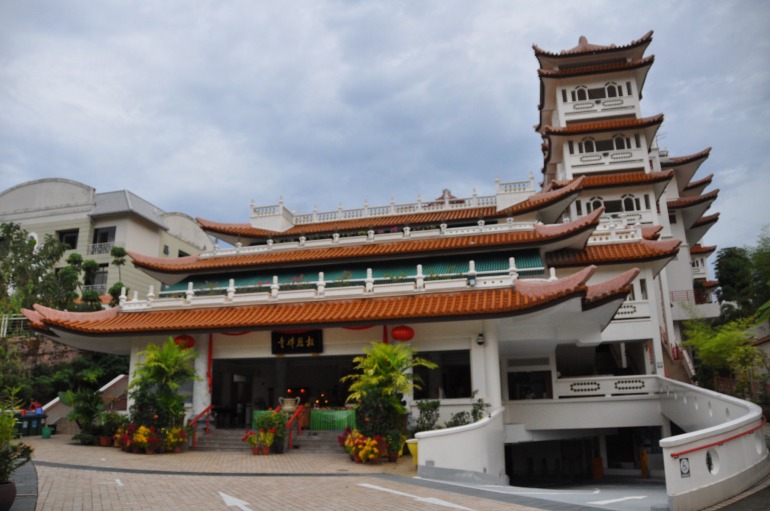 Poh Ern Shih is one the few zero-energy buildings in Singapore, the other being the Building and Construction Authority (BCA) Academy along Braddell Road.

A zero-energy building generates more power than consumed. Similar buildings are already found in the United States, Europe and Malaysia.

“It’s technically possible to turn every building into a green building,” said Mr Lee. “The whole country can generate power.”

Such possibilities were distant dreams in the 1860s, when French mathematician August Mouchet first proposed an idea for solar-powered steam. Together with his assistant Abel Pifre, they constructed the world’s first solar-powered engines.

But solar power was not widely used in buildings today. High cost of solar panels and slow returns of investment have deterred many from taking it up.

Fossil fuels such as petroleum, coal and natural gas turned out to be much cheaper and easier to use. Today, they account for nearly 100 percent of Singapore’s energy sources.

But this is slowly changing. Mr Christophe Inglin, managing director of solar equipment maker Phoenix Solar, argued that grid parity, a point where solar power will cost as much as fossil fuel, is “nearly there” for Singapore.

This grid parity will allow solar power to compete with fossil fuels in the market, leading to its mainstream acceptance.

This is partly helped by rising oil prices over the past decade, advancements in solar technology and the entry of China into the solar market.

In the search for cleaner energy, Mr Tsoi Mun Heng, director of the energy innovation challenge directorate at the National Research Foundation, believes that solar power is the way to go.

Even though its potential is constrained by Singapore’s land shortage, Mr Tsoi said that solar power is still best option compared to wind, tidal and nuclear power.

“Ideally, we want an energy source with no radioactive fallout and carbon dioxide emissions. It also has to free, abundant and will never run out. That’s a tall order.”

For the BCA Academy, its 1,540 sq m of solar panels was funded by the Economic Development Board. Similarly, Poh Ern Shih receives tax-free donations from the devotees which helped to cover the cost of solar panels.

Such funds are not available for individual home owners, according to Mr Tsoi Mun Heng.

He points to the high upfront cost for solar panels as a barrier to turning buildings to power plants.

“You need to pay 20 years of electricity upfront, and then the sun slowly pays you back. That kind of financing model is very difficult for many people.”

But he believes this can be solved through initiatives such as solar leasing – an initiative in 2011 by Housing Development Board (HDB) to allow private companies to pay for solar cells on rooftops.

“The company takes the risk and pay for everything upfront. They sell electricity generated from the sun to the residents and that’s how they get their money back,” he explained.

Mr Ng Chun Tat, head of the sustainability and building research at HDB, believes that it is commercially possible to install solar panels on a larger scale.

Investing in solar power already makes commercial sense, said the senior engineer, adding that on paper, every dollar invested on solar power will generate more than a dollar in returns.

“But for a small company, they only have one or two blocks. Of course, the price of solar panels will be more expensive,” he said.

“For us, it’s different. We have economies of scale, we have 9,000 buildings. If one day, HDB decides to implement this, the whole price will just drop.”

And the idea is not that far-fetched. HDB could open the floodgates to wide-scale implementation of solar panels on many buildings in Singapore.

“It will not be immediate but I think it is possible,” Mr Ng said. “One day, you will see all our buildings with solar panels.”

Even when solar power is insufficient, buildings in the future can turn to another new source – hydrogen power harnessed from water.

While lacking in drinkable water, Singapore has abundant rainfall throughout the year and is surrounded by seas.

About 2342.22mm of rain falls in Singapore each year, with the longest recorded dry spell lasting only 40 days, according to National Environmental Agency.

Recognising the potential of rainwater in powering buildings, Dr Ernest Chua Kian Jon at the National University of Singapore (NUS) is leading a four-man team in developing a cost-effective way to extract power by using rain collected on rooftops and solar power from photovoltaic (PV) panels.

“Rooftops can be equipped with PV panels which make use of sunlight to produce enough electricity for electrolyzing water, separating the hydrogen and oxygen,” said Dr Chua.

“The hydrogen is then stored into fuel cells which in turn generate power for communal equipments of the block.”

But Dr Chua estimates that, within five to 10 years, the hydrogen system will be ready for the local market.

“This system can be implemented easily in HDB apartments, converting them into energy-generating buildings,” he said.

“It will also provide extra shielding from sunlight on rooftops, resulting in reducing the cost of air-conditioning for the buildings.”

The hydrogen system can also split seawater, an abundant resource for an island state, making the power generation possibilities endless.

“If you can build power plants along the coastal areas, you have the potential to power a city just using seawater and solar energy,” he said. 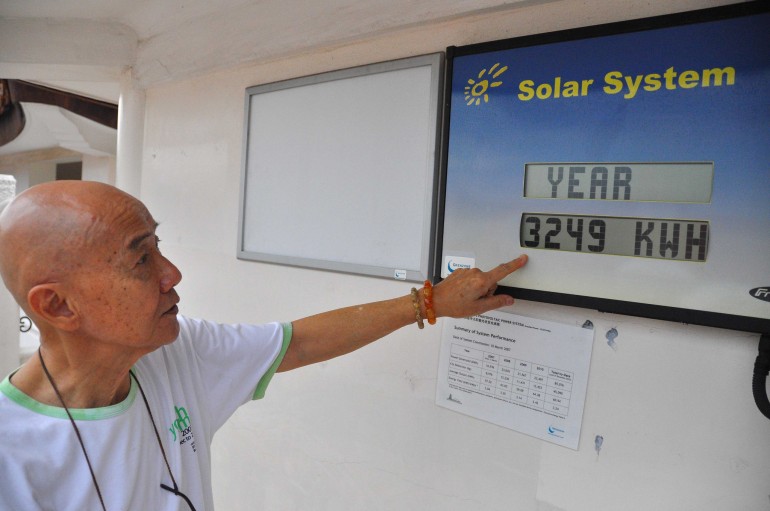 And powering up the entire city is the dream of Mr Lee, the owner of Poh Ern Shih temple.

When he moved to Canada in 1969, he observed how the locals maximise every resource around their houses.

“Living in cabins in the forest, we have no government electricity,” he recalls. “But we have generators, solar, wind, and also turbines on the flowing river.”

In the Canadian cities, Mr Lee also observed solar cells in the rooftops and windows. He believes Singapore can adopt similar practices.

He is not satisfied with what he has achieved in his temple. He is dreaming of plans to produce even more electricity. Next month, a third batch of solar panels will adorn the temple roofs.

There are even plans to tap energy from rainwater running down from the temple rooftop. When the temple was renovated in 2008, Mr Lee had specially arranged some temple pillars to have a hollow core.

Like a mini-dam, he plans to channel rainwater through turbines placed within these cores to generate hydroelectric power.

Through these measures, he wants to ensure that the monastery will always generate extra electricity like a resilient battery. 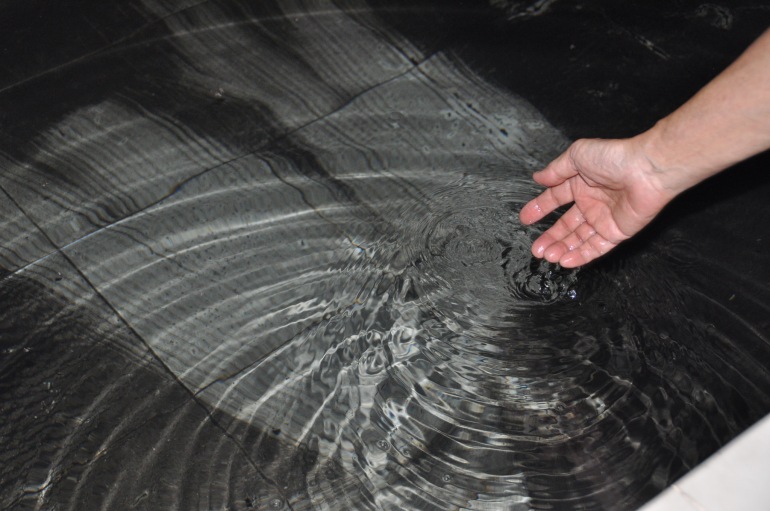 Thinking Of The Future

Mr Lee’s investment into green technology is costly, but temple devotee Lee Ah Choon, 48, believes they are a long-term investment.

“It’s (the temple) not something you build for a short while,” said the devotee who donates about $300 to $400 a month to the temple.

“When we donate, we don’t have to see returns,” the chemical engineer added. “The temple is doing a lot of charitable work. They allow old folks to come, eat meals and learn about the religion.”

“If you look at the oil prices today, it is always increasing,” said the 49-year-old who had spent three years helping out at Poh Ern Shih.

“For such a big temple, electricity bills are rather big figures.”

Although some had reservations over the extra costs, she recalled that Mr Lee had already “tried his best” to explain why green technologies are important.

“He probably did his calculations,” said Ms Ng. “If we can generate electricity ourselves, the bill won’t be such a heavy burden on us.”

Mr Lee is proud of his temple. When visitors arrive, the 72-year-old man eagerly ushers them around like a child showing off his new toy.

From the underground water storage tanks, to the rooftop solar pagodas, to the stains on the newly whitewashed wall caused by offshore refineries nearby, Mr Lee misses nothing and enthuses about the possibilities of the future.

But deep in his heart, he laments that Singapore has not invested in green technologies earlier.

“We are so dependent on our neighbours for oil and electricity, for everything we need,” he said.

He believes that the country must step up efforts to produce alternative energy, and it has to come from Singaporeans, especially the younger generation.

“They have to believe in it. It has fallen onto the shoulders of their generation now.”