Written for InSing News in May 2012

Should the Hougang by-election concern only Hougang residents, or is it an unofficial report card of ruling People’s Action Party’s performance one year after the 2011 General Election?

The PAP and Workers’ Party (WP) had been at odds over how to frame the upcoming poll, the first of its kind since 1992.

The ruling party appears to want to keep it a local affair. When he introduced Desmond Choo, PAP’s man for Hougang, Deputy Prime Minister Tharman Shanmugaratnam emphasised the importance of local issues.

“This by-election in Hougang is a local contest about who Hougang residents want as their representative in Parliament,” Mr Tharman said. “It’s about who can serve the residents, and help them solve their problems.”

Throughout the campaign, Mr Choo also followed a local approach.

He has repeated that the by-election is about choosing a Member of Parliament who can serve the long-term needs of Hougang residents. But he also touched on a few national issues, such as tackling low wages and insurance for unborn children.

The WP, on the other hand, has insisted on highlighting the national significance of the by-election.

At a rally last Saturday, WP media team chairman Gerald Giam argued that Singapore is a small city-state and Hougang residents will be affected by national issues such as transport, housing and education.

“So why is the PAP so reluctant to talk about national issues at this by-election?” Mr Giam said. “Is it because they are concerned that many Singaporeans are not happy with their performance over the past one year?”

The WP also argued that Hougang plays a unique role in Singapore, keeping the opposition voice alive in Parliament for two decades.

If elected, the party’s candidate Png Eng Huat said he intends to champion national issues such as low wage workers, transport and education.

…Will Hougang residents be persuaded to see the by-election as a local affair, or will they be swayed by national issues affecting the rest of the country?

An examination of the popular votes in Hougang and nationwide over the past six General Elections could give some clues. 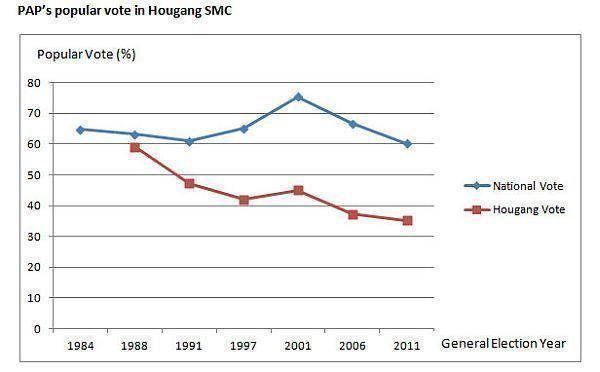 Between 1997 and 2011, there appears to be a strong co-relation between PAP’s popularity nationwide and within Hougang.

The PAP’s share of the vote in Hougang changed in a similar pattern to that of the national vote.

The graph suggests that the voting decisions of Hougang residents could be swayed by moods outside the constituency.

“You can look at the national vote share as a baseline, but obviously there is huge scope for local variation, which usually depends on who the candidates are, and local grievances,” he added.

The PAP’s popularity is not at its peak. At the last General Election, the PAP secured 60.1 percent of the national vote, their lowest since independence.

National issues also took centre stage during the polls last year, when the WP wrestled Aljunied Group Representation Constituency (GRC) from the PAP.
Shortly after losing his seat in the ward, former Minister for Foreign Affairs George Yeo told the media that he understood the national scale of the electorate’s grievances.

“This desire for a strong WP voice in Parliament was a political tide which came in through Aljunied, which we were unable to withstand despite our very best efforts,” he said back in May. “Right from the start, the WP made Aljunied a national battleground.”

Nonetheless, there are examples which bucked the trend and both PAP and Opposition candidates had successfully increased support in wards against national trends.

In the election last year, despite a six-percentage point dip in support for the ruling party, PAP candidate Sitoh Yih Pin was elected in Potong Pasir, ending the Opposition’s 27-year hold in the constituency.

Even in Hougang itself, its former MP has achieved such a feat.

In 1997 General Election, despite a four-percentage point jump in the PAP’s national vote, then-Hougang MP Low Thia Khiang improved his share of the Hougang vote from 52.8 per cent in the last election per cent to 58 per cent.

And as Polling Day in Hougang looms yet again [26 May], Mr Choo’s efforts to win the hearts and minds of Hougang residents remain uphill.

Although his chances of winning are slim, any reversal of PAP’s sliding popularity in the ward could help rejuvenate the ruling party [ie after the 2011 polls].